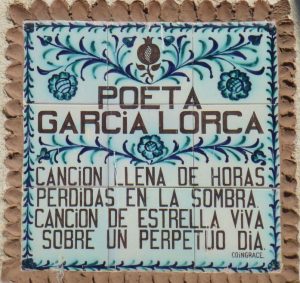 Federico was born near Granada in 1898 and was deeply influenced by the rich heritage of the Moors and the gypsy culture of southern Spain’s Andalusia region. At the age of twenty-one, he moved to Madrid and became associated with the group of artists known as the Generation of ‘27 which included Salvador Dali, Luis Buñel & poet Rafael Alberti. Lorca and the composer, Manuel de Falla organized the Festival del Cante Jondo in Granada in 1922.

Lorca traveled to New York in June 1929 & wrote his famous book, Poeta en Nueva York. Upon his return to Spain, Lorca organized a traveling theater group called “La Barraca”. They toured the country side during 1932-1933 offering free performances. During this period, his company produced three tragedies. Blood Wedding, Yerma and the House of Bernarda Alba which solidified Lorca’s place as a literary genius.

Moved by the fatal goring of his friend the Matador Ignacio Sánchez Mejias in 1934. Lorca wrote the extraordinary Lament in his memory. Part I entitled La Cogida y la Muerte (The Goring & the Death) includes the haunting phrase, “a las cinco de la tarde”.

Lorca was arrested during the Spanish Civil War for being a dangerous intellectual and executed in Granada on August 19, 1936. His body was dumped into a mass grave, and afterwards Lorca’s writings were outlawed and burned in Granada’s Plaza. Even his name was forbidden.

Federico Garcia Lorca is the inspiration for our programs taking the power of the spoken word to share experiences of love, humanity, honor, death and reminiscences.

Poema del Cante Jondo
From Poem of the Deep Song

Dance
(In the Garden of the Petenera)

In the night of the garden,
six gypsy women
dance in white.

In the night of the garden,
crowned
with paper roses
and jasmine.

In the night of the garden,
their teeth -mother-of-pearl-
inscribe the burnt
darkness.

And in the night of the garden,
their shadows grow long
and purple
as they reach the sky.